I sold the Sigma DP3M. I bought a used Sigma DP1M, the same focal length as th Ricoh GR.  I will be testing it out if a few days. I will post shots here. The DP3M focal length was nice, but I had a tough time with the focus due to my eyes. I had to be spot-on, and it was much harder to do with this camera than the DP2M, which I previously owned and regretted selling. I almost opted for a new DP0 Quattro for the very wide 21mm focal length, because I wanted the option to use the 21:9 ratio which is pretty close to the Hasselblad XPan film camera I just sold. (Loved it but was afraid it would eventually break down in a few years and I doubt Hasselblad will be able to fix it without it costing a mint. I bet they don't even have parts anymore or deal with it. Hasselblad should come out with a digital XPAN, Anyway, the DP0 Quattro was going to be my digital XPan. Why they haven't when they could make a MINT? I don't know. It doesn't have to be full frame. It could be two APS-C sensors side by side. Heck, I'd even settle for micro 4/3rds if the side to side 21:9 ratio could work.)

Anyway...I found out from a few Quattro owners that the Foveon glow is gone, that the Quattro lost it due to Sigma changing it up to accomodate faster ISO shooting, and better colors. Many have told me they dumped their Quattros and went back to the Merrell line. I've also heard the SD H camera body is big, bulky, a quattro, (so it lost that foveon yumminess), and the lenses do not compete with what the attached permanent lenses on the Merrells can do. Sorry. You screwed up, Sigma. Go back to the full on frontal Foveon sensor, please! Oh, and if you could make a camera that shoots real 21:9 ratio with two side by side Foveon sensors, then I'd pay 2K for that. Come on, Sigma. It will be a collector's item along with your DP Merrill libe. Dump the Quattros, improve the Merrell series, add an EVF, fix Sigma Phot Pro so it doesn't crash every second, (even on the fastest of computers.)

I love my Ricoh GR.  I carry small cameras like this Ricoh everywhere. It's my preferred way of daily shooting. I only use the bigger gear when I have specific shoots. The Ricoh is such a joy to use most times. I don't love the slow AF in low light. It's one of the worst cameras I've owned for low light in regards to autofocusing. Sigma DP Merrill series actually focus pretty well. It's the ability to shoot in low light/highISO that is Kryptonite for the Sigma DP Merrill series. Still, I've gotten beautiful monochromes in ISO 800 from my Merrill cameras. Best monochrome camera ever. EVER. EVER. Yep. I said it. Not only does it produce beautiful monochrome files, but the detail in the shots blows most everything away. It comes at a cost. A pain in the a** to use for most due to the inability to shoot in low light without a tripod and long exposures. I just don't care about that. I don't care that the Sigma DP Merrill cameras are slow, have no EVF (well, I do, but I don't if the results are files such as these).

So, the DP1M has just arrived. It's used. I am revving up the battery. I can't wait to compare the files from the Ricoh GR to the DP1M.

That's it for now.

Well, two quick shots. Raining out. Converted to Monochrome TIF in SPP, then chaned to JPEG in Photoshop CS6. 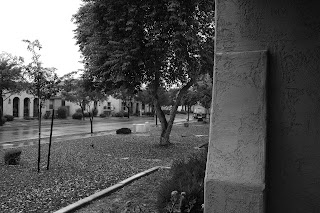 Posted by Lainer at 2:07 PM No comments:

Update: I still have the Sigma DP3M, Leica D-Lux 4, Sony RX100V, Ricoh GR and Fuji X-T10 with 35mm F/2 Lens.  I recently bought the 23mm F/2 WR Lens, and am trying to get used to the 35mm focal length, I prefer 28mm and am used to it, but the 35mm was one of my favorites years ago, and I think it will take some time to get used to it again. Though I have a mix of cameras, each one has its purpose and focal length. I was trying to whittle it down to one system and various lenses, but I found that each system was annoying in some way and I just didn't want to invest too much in any of them for various reasons.

Sigma DP3M has an equivalent of a 75mm lens, good for portraits and product shots. Some people use it for macro, though it really is not a macro camera. Foveon sensor is unique and grabs the most detail of any camera I've used. It has 3 sensors, one on top of the other. hence the different, layered, 3D-looking files. Lots of detail. Looks like slide film. The Monochrome images are the best I've seen that are non-film. The 3 shots below were taken with the Sigma DP3M. Eats batteries, no EVF, slow to work, can shoot in low ISO only unless converted to B&W. Files fall apart even in B&W at 1600 ISO, so not good in low light at all. Best used on a tripod, but makes for a wonderful landscape camera if you are looking to pack small. Have to use the Sigma software to develop the TIFF files, but then can bring the files into Iridient Developer, Capture Pro or finally the dreaded Adobe Photoshop in the Cloud. (I luckily still  have CS6). I keep hearing that it's best not to use Adobe anything for these files (just like I hear it for Fuji), as their programs can't handle all the differences in the sensors for this Foveon and the Fuji's X-Trans. You be the judge. I use Photoshop CS6 because it's what I know. I can honestly say that this camera shows so much detail and layering, that I can't seem to sell it, even though it's a struggle to use sometimes. It's certainly limiting. The files are sublime though. I guess I've always been one of those people who isn't happy until I have to jump a hurdle to get a shot though. I could sell all of this smaller gear and opt for a beautiful Nikon D810 and be done with it. I'm older. My eyesight isn't the best, and my neck and back are toasted, hence the desire for smaller gear. As the gear gets smaller, the issues get more annoying.


Now the Fuji system, speaking of annoying. I first purchased an X-E1 which I sold after a month or two because we just didn't get along. The missed AF focus and the blurred shots, even with the new firmware drove me nuts. Loved the feel of the camera. Liked the sharp kit lens, though I wanted primes if I committed to this brand. I didn't like the smearing of files. Since I sold the X-E1, they company has come out with so many more cameras, and they have improved. I love the JPEGS, but they are wasted on me, the perfectionist who needs RAW files to work on. I shoot RAW and JPEG, but rarely use the JPEG. I know many people do. Professionals use the JPEGS. I totally get it. I'm too anxious to use them. I hate wasting all that extra data in the RAW file. Yes, it means more work on the pictures to get it to where I want it, but I am so used to doing this, it's what I do.

Anyway, I tried and X-Pro 1, hated the OVF. I couldn't see what I was focusing on. I like the ergonomics, but I sold it.

I already had the X-T10 with 35mm F/2 WR Lens. The ergonomics on that for grip are crap. I added the expensive external grip, it is sufficient to hold almost, but now makes the camera noticeably bigger which defeats the purpose of buying the smaller model. So aggravating, because I had recently sold my Sony A6000 with more megapixels and a lovely grip. I could hold that camera in my hand all day long. It was a joy to hold. The menus on that camera that people complain about? Well, I was used to them. I hated the ARW RAW files formats. Drove me nuts. Had to use the Adobe RAW converter before bringing them into CS6, which is just annoying. Still, it was a fun camera to use. I do miss it. I do NOT miss the softness of that kit lens. I miss the focal length of it though. I wish Sony had a better kit lens. If they did, it would be the perfect camera to carry everywhere. The file colors weren't as nice as the Fuji in my opinion though and that is what made me finally drop the brand. I never thought of delving into the A7 series of cameras because APS-C was my sweet spot, the full frame was expensive ,and it defeated the purpose of using smaller cameras. I certainly wasn't going back to a D-SLR and my Nikons were collecting dust in the closet. I almost purchased the better X-T2 because I wanted the feature set, plus more megapixels, and that ACROS setting. Since I really don't shoot JPEGs and am good at monochrome conversions, I couldn't honestly use that as an excuse to spend $1599 on that camera. I could use the extra megapixels and better features. I read somewhere that the better sensor gets rid of the waxy look on files. Not sure if that is true. I like the lenses of the Fuji better than Sony's line-up.


The Sony A6000 B&W files (converted from RAW) look good. The color files, not so much.

Here are some Fuji files with the new 23mm F/2 WR Lens below. I am getting used to that focal length again.

I'm still getting used to this lens. I'm still on the fence about Fuji. It ticks a lot of boxes, but I'm still frustrated with the camera itself. I want more megapixels in the X-T2. Not sure if I want to invest that much more money into it. I am trying to whittle down the gear. I still use my Ricoh GR, Sony RX100V &  Leica D-Lux 4 a lot too. I can't sell all of these to keep one brand. because each piece of gear is good for different reasons. I don't know that there is an answer. I wish there was one brand. I'd stick with it. I love Ricoh's GR series, but miss an EVF viewfinder, and tilting screen. I would also miss a dedicated sharp zoom lens and the ability to change lenses. The smaller compacts come in handy because they are small but still produce lovely shots, and the Sony produces 4K video. Great in a pinch. It also has a self articulating screen.

The Ricoh GR shots below. My favorite to carry around all of the time.


Sony RX100V next. What do you think of the shots below? Are they good enough? I think so. They don't beat the Ricoh GR but for a zoom lens camera that is small and is able to shoot 4K video, it does the job most days.


Anyway, my point is that it's hard to choose just one camera for every situation. I find it frustrating at best.